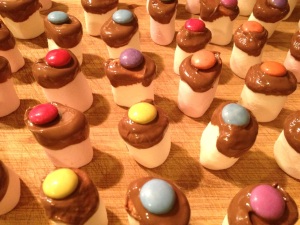 #1 Asking a friend if there was anything I could make for her children’s joint birthday party. Taking her up on her suggestion to make a batch of ‘Top Hats’ (marshmallows, dipped in melted chocolate and topped with a sweet – about my level of cooking). Handing over my chocolate-topped treats to my friend then seeing her look of surprise. Turns out the chocolate is supposed to be at the bottom! (Spot the non-parent.)

#2 Proudly forking up a handful of home-grown carrots to use in a pot of home-made carrot and ginger soup, thinking: ‘How self-sufficient is this?” Then rapidly losing my appetite for said soup when cleaning the carrots in the sink and discovering a tiny worm. *Shudder* You don’t get one of them when you buy from a supermarket!

#3 Commencing the afore-mentioned washing of carrots wearing a plaster on one finger and a pair of rubber gloves (just as well, given the finding of the worm), yet finishing the soup making without a plaster on my finger. Uh ohhhhh.  (Fear not, hours later I found it stuck in the fingertip of one of the rubber gloves. But it did prompt my second icky moment of whether I really wanted to eat the soup.)

#4 Putting a pot of potatoes on the cooker, nipping back to my home office to squeeze in one last half hour of work while they boiled… then slowly becoming aware of that smell. You know the one that tells you a) you’ve left the pot for way longer than was either intended or wise, b) the pot has since boiled dry and c) your house is going to smell like the scene of a blaze for days. (I’d like to say this was a one-off but it has happened many, many times with porridge in the morning for exactly the same reason.)

#6 Attempting to make any kind of white sauce – plain, cheese or otherwise – thinking I could simply replace cow’s milk with soya milk without any difference in taste. Technically not my fault, but once tried, never repeated. So I’m just spreading the word for anyone else off cow’s milk. (Tip: goat’s milk is supposed to work out okay in sauces but I’ve not tried it yet.)

#7 Following a recipe’s advice to preheat the oven and “put in a baking sheet in case of sticky drips later.” Sticky drips? Are you joking? When I checked back on my cake 20 minutes later I found about two thirds of the contents had ‘dripped’ onto the oven floor. A waste of good ingredients and the moment it dawned on me that not all recipes work. (Well, either that or I mixed up Bicarbonate of Soda and Baking Powder. Possibly… )

#8 In a well-meaning attempt to line my stomach and that of my then-bf ahead of a big night out, willing a pot of pasta to cook in super quick time (there was hair still to washed and make-up to be applied, c’mon – priorities) and as a result, taking it off the heat too soon. Cue the pair of us sitting there trying to wolf down a bowl of half-raw tagliatelle. Not as easy as you’d think.

#9 Hosting Christmas Day dinner. Pre-planning what goes in the oven, when and for how long with near military precision. Serving up and enjoying dinner. Then on clearing up, finding a full tray of parsnips languishing unserved in the oven. (It’s actually become a bit of an alternative Christmas tradition for my family now, with one or other of us forgetting to serve something.)

#10 (Not one of my own, but too good not to share.) On Christmas Eve night, planking a freshly-made pot of soup for Christmas Day out of sight in a spare room to cool. Re-heating it on the big day, slowly stirring it round and round and round… only to see a mouse (dead) slowly float to the surface. *Everybody scream*

© Lesley Dougall Copywriting Limited and 10thingsby.com, 2014. Unauthorised use and/or duplication of this material without express and written permission from this blog’s author and/or owner is strictly prohibited. Excerpts and links may be used, provided that full and clear credit is given to Lesley Dougall Copywriting Limited and 10thingsby.com with appropriate and specific direction to the original content.
%d bloggers like this: