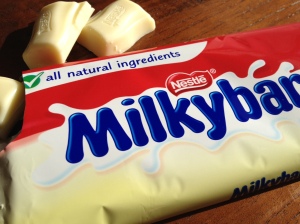 #1 Sad news from the Nestlé chocolate factory. A man was crushed to death under hundreds of boxes of chocolate. Apparently every time he shouted: “The Milky Bars are on me!” his workmates just cheered.

#2 A man and his flat-chested wife go to see a marriage counsellor. The counsellor asks: “What seems to be the problem?” “Well,” says the man, “Dolly-f*cking-Parton here thinks I’m too sarcastic!”

#4 A police officer pulls over a driver for swerving in and out of lanes on the motorway. He instructs the driver to blow into a breathalyser. “I can’t do that officer, I’m an asthmatic,” explains the driver. “I could get an asthma attack if I blow into that tube.” The police officer thinks for a moment then replies: “OK, we’ll just get a urine sample down at the station.” “Can’t do that either officer,” says the driver. “I’m a diabetic. I could get low blood sugar if I pee in a cup.” The officer thinks again then concedes: “Alright, we could get a blood sample.” The driver shakes his head. “Can’t do that either, officer. I’m a haemophiliac – if I give blood, I could die.” Perplexed, the officer says: “Fine then, just walk this white line.” Once more, the driver shakes his head. “Can’t do that either, officer.” “Why on earth not?” demands the officer. “Because I’m drunk.”

#5 A boy asks his gran: “Have you seen my pills? They were labelled LSD?” His gran replies: “F*ck the pills, have you seen the dragons in the kitchen?!”

#6 A woman, feeling frisky, strips naked in front of her partner. She asks him: “What turns you on more… my pretty face or my sexy body?” Her partner looks her up and down and replies: “Your sense of humour!”

#7 Paddy is lying upstairs in bed watching Babestation. He phones the number at the bottom of the screen and the Babe says: “Hello sexy, what can I do for you tonight?” Paddy asks: “Do you see that sofa you’re lying on?” “Yesssss,” purrs the Babe. “You wouldn’t jump over the back of it and hide?” asks Paddy. “Sure sexy, but why?” enquires the Babe. Paddy replies: “Well it’s just the wife’s coming up the stairs and I can’t find the bl**dy remote!”

#9 My mate just hired an Eastern European cleaner. It took her 15 hours to hoover the house. Turns out she was a Slovak.

#10 Little Daniel asks his dad for a telly in his room. Reluctantly, his dad agrees. The next day Daniel comes downstairs and asks: “Dad, what’s love juice?” His dad is horrified but proceeds to tell Daniel all about the birds and the bees. Little Daniel just sits there, saying nothing, his mouth wide open in wonder. His dad asks him: “So, what were you watching?” Daniel says………. “Wimbledon!”

© Lesley Dougall Copywriting Limited and 10thingsby.com, 2014. Unauthorised use and/or duplication of this material without express and written permission from this blog’s author and/or owner is strictly prohibited. Excerpts and links may be used, provided that full and clear credit is given to Lesley Dougall Copywriting Limited and 10thingsby.com with appropriate and specific direction to the original content.
Loading Comments...
Comment
×
%d bloggers like this: